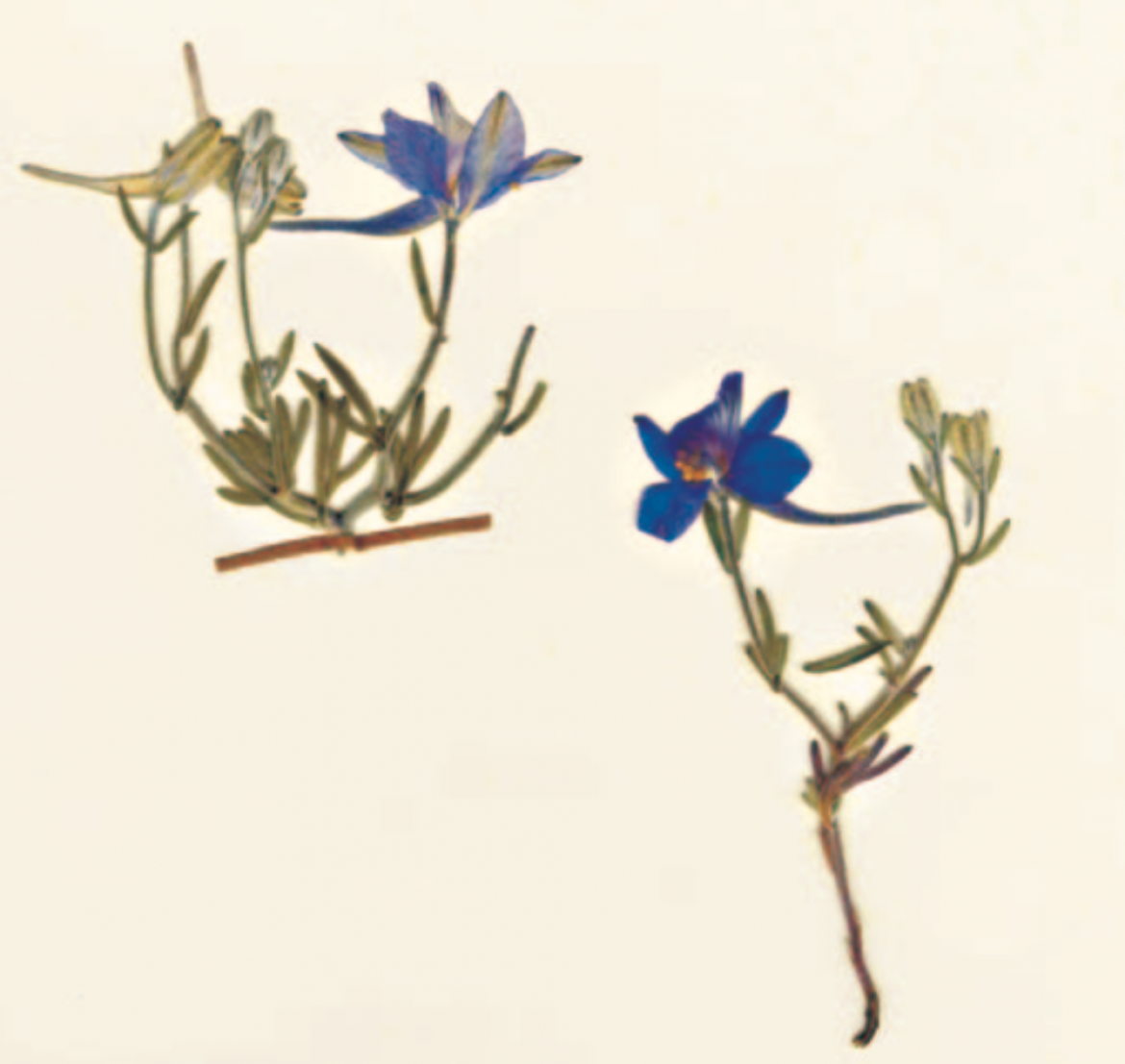 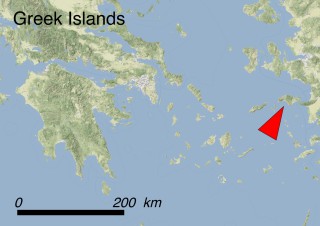 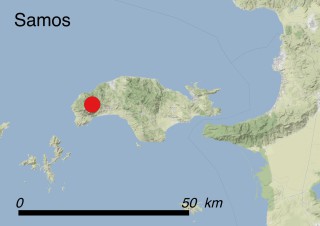 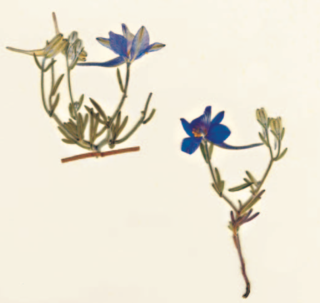 Consolida samia is a narrow endemic whose distribution range was thought to be restricted to the Island of Samos, where it grows on the steep limestone scree of Mt. Kerkis at an altitude of 800 m a.s.l. (habitat 6.1: Screes). In 2011, a second population was found in a very limited area of Soma Kocasivri hill in the Balikesir border of Manisa (western Anatolia, Turkey) at an altitude of 900 m a.s.l. This species appears to be restricted to a very particular habitat. It grows only on loose pebbly gravel-like screes, with the largest pebbles measuring about 2 cm in diameter and has never been found in any adjacent rocky areas or neighbouring fields with larger stone outcrops. The scree where it grows has no dense vegetation cover, yet despite growing in the open, this plant is easy to overlook because of its very small size.

Consolida samia is a small annual plant with an approximately 4-6 cm tall, scarcely branched stem covered with dense woolly hair. Its leaves are divided into three narrow segments that are 1 cm long. The plant also has smaller hairy modified leaves that are linear and often undivided. It produces one or two characteristic pale lilac flowers per branch. The corolla is subtrilobed, the middle lobe is short, broad and purple-veined, while the two lateral ones are small and triangular. The outer petal has been modified into a 15-17 mm long spur, nearly twice as long as the corolla.

Consolida samia is closely related to the sympatric congener Consolida hellespontica, but the two species never co-occur as they have different ecological requirements. The steep limestone scree where Consolida samia grows is of high scientific interest because it supports only a few species, most of which are endemic to the Aegean Islands.

This species has been categorized CR (Critically Endangered) according to IUCN Red List Criteria B2ac(iv). The AOO is 2 km2 and the EOO approximately 200 km2 when calculated with a 1×1 km grid (due to the lack of exact location data).

This means that the only two known populations of the species are severely fragmented and isolated. They grow over a very limited area and the number of mature individuals is expected to present extreme yearly fluctuations. The population recently found in Turkey is subject to intense grazing pressure (threat 2.3.2: Small holder grazing, ranching or farming) and the number of individuals is lower than 100. Taking into consideration only the data concerning the population on Samos island, the species was categorized as CR under the criterion D within the European Red List of Vascular Plants. According to previous reports from the single locality on the island of Samos, the population counted ca. 20 and 100 plants in 1975 and 1996, respectively. The plant was repeatedly searched for and not found again. Since it is an annual, the population may be prone to normal yearly fluctuations and site shifts. The plants grow in an inaccessible area and are small so they may have been missed or are stored in the soil seed bank, awaiting suitable conditions to germinate. The worst scenario would be that this species is already extinct.

The re-establishment of the species will become increasingly unlikely along with the shrinking of the extant populations. In fact, only the few remnant living individuals may be able to spread some of their seeds uphill through wind dispersal, while most of the seeds already stored in the soil are transported downhill by erosion or due to normal scree dynamics, hence into areas containing larger stones which probably represent an unsuitable habitat for the species (threat 10.3: Avalanches/landslides). The restricted area of occurrence makes this species sensitive to any habitat modification (threat 7.3: Other ecosystem modifications). If the plant is not yet extinct, it is potentially threatened with gathering by plant collectors (threat 5.2.1: Gathering terrestrial plants - Intentional use) and genetic isolation due to its small population size.

Legally: This species is listed in Appendix I of the Bern Convention, and as a priority species in Annexes II and IV of the 92/43 EC ‘Habitat’ Directive. If still present, the Greek population enjoys indirect protection as it falls within the Natura 2000 site GR4120003 ‘Samos: Oros Kerketefs - Mikro kai Megalo Seitani - Dasos Kastanias kai Lekkas, Akr. Katavasis - Limenas’.

Ex situ: There are no current measures in place.

Field studies are necessary to update current knowledge on the distribution of the plant and the main risks it faces. Studies should include research on its reproduction biology that have not yet been undertaken. Conservation actions should be carefully planned based on the results of this research. Expansion of the already existing Mt. Kerkis Reserve to include the scree fields would provide further protection and could effectively protect several other co-occurring local endemic and endangered plants as well as several rare cliff plant communities and species-rich pastures and forests. This species would also benefit from ex situ cultivation in botanical gardens.