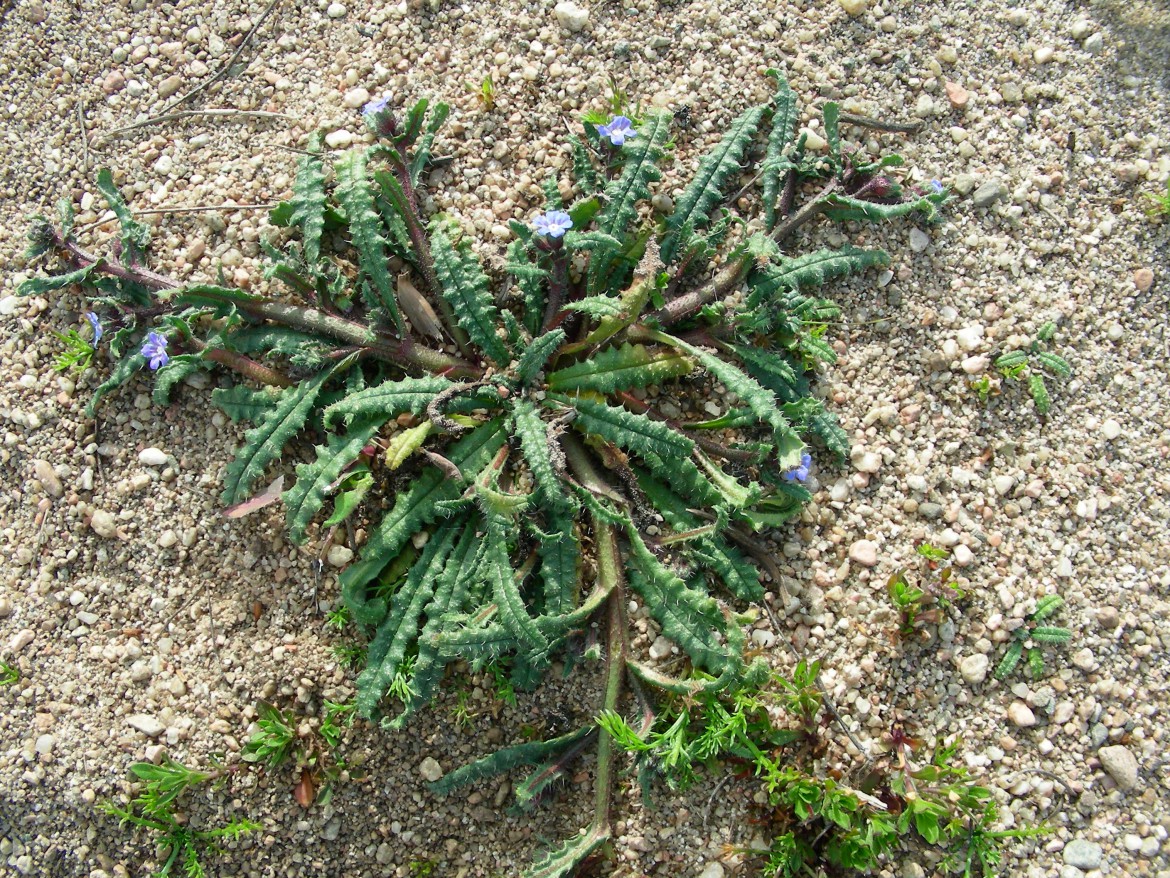 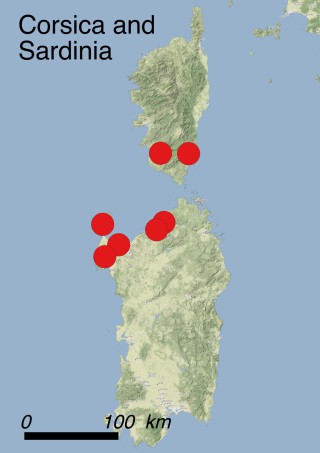 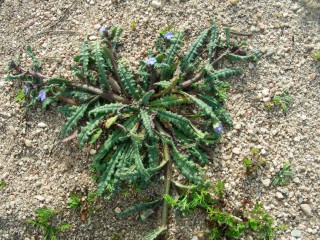 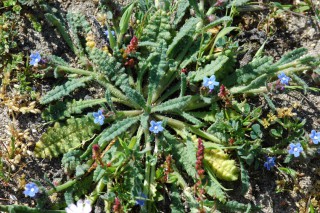 Up to now 14 subpopulations of Anchusa crispa are known to grow along the NW coasts of Sardinia and 6 in Corsica. The global AOO of the species is 76 km2 (56 in Sardinia and 20 in Corsica). A. crispa prefers sunny places on the upper part of sand shores (habitat code 13.3: Coastal Sand Dunes). It generally grows on coarse sands and gravel and it is often found near estuaries within thermo-hygrophilous scrubland communities dominated by Tamarix africana (5.3: Shrub-dominated wetlands). The most common co-occurring species are Elytrigia juncea, Glaucium flavum, Ammophila arenaria subsp. arundinacea and several other psammo-nitrophilous annuals and biennials.

Anchusa crispa is a biannual or short-lived perennial, rarely annual herb, 10 to 35 cm tall. The ramified stem is erect at the base and then decumbent, and is covered with long erect and rigid hairs. The leaves are 5-10 cm long, lanceolate and undulate-crispate. Flowering occurs between March and June; the pale blue or purplish (white for the Sardinian subpopulation of Porticciolo) tubular flowers are grouped into loose alternate inflorescences. The populations of Sardinia are now referred to two different subspecies, A. crispa subsp. crispa and A. crispa subsp. maritima. Slight differences have been detected also among western and eastern Corsican populations: ongoing investigations will probably clarify whether they are worth being assigned to different subspecies as well.

Substrate features such as depth, nutrient-richness and humidity strongly affect the vigour of the plants and their fertility. The seeds are achenes that perform short-distance dispersal by ants (myrmecochory) and, occasionally long-distance dispersal through cattle passage or by flowing down local streamlets. A. crispa may tolerate occasional trampling, but rapidly disappears under excessive disturbance.

This plant has been recently assessed as Endangered at regional level both in Corse and in Sardinia. Considering the available data, A. crispa can be categorized as EN (Endangered) at global level according to IUCN Red List criteria B2ab(ii, iv, v), because the AOO is equal to 76 km2, the population is severely fragmented, the number of locations is >5 but the population is severely fragmented and shows a continuous decline in terms of occupied surface, habitat quality and number of mature plants. The surface-area occupied by all Corsican subpopulations is less than 5 ha; additionally, all of them are represented by few individuals, at least three (one in the north of the Gulf of Valinco and two on the eastern coast) are severely decreasing and another one (at Campitellu) disappeared in 1999. All the conservation measures that have been applied up to now appear to be totally inadequate to reverse this trend. Additionally, the fragmentation of populations increases their vulnerability to natural or anthropogenic disturbance. Exceptionally strong windstorms (threat code 11.4: Storms & flooding) occurred between 1999 and 2002, causing the repeated accumulation of very high amounts of sand over the shores where the populations of A. crispa grow, and causing a striking decrease of the individuals of several populations. The species is prone to several disturbances connected with the touristic exploitation of the seaside such as pedestrian, motorbike and vehicle trampling, camping activities, beach ‘cleaning’ activities (threat 6.1: Recreational activities), trail and road construction (threat 4.1: Roads and railroads), manual or chemical plant removal near restaurants (threat 5.2.3: Persecution/Control) and by sand withdrawal (threat 7.3: Other ecosystem modifications). Moreover, the construction of cement ditches along the roadsides (threat 7.2: Dams and water management/use) near the beaches may represent an additional threat for the survival of the species by reducing the overall water input on sand shores.

Legally: the Corsican populations of A. crispa are legally protected at national level (decree of 20 January 1982, amended August 31, 1995): in fact, since 1995 the species is included within the Red Book of the Threatened French Flora (= Livre Rouge de la Flore Menacée de France). In Sardinia, the species has been recently assessed as Endangered in the New Italian Red List. At an international level the species is included in the Annex I of the Bern Convention and in Annexes II and IV of the 92/43 EU Directive ‘Habitat’ as a priority species. Several Sardinian populations fall within the National Park “Asinara” and the regional park of “Porto Conte” or within Natura 2000 sites ITB010001 “Isola Asinara”, ITB010042 “Capo Caccia e Punta del Giglio”, ITB010002 “Stagno di Pilo e Casaraccio”, ITB010004 “Foci del Coghinas”, ITB012211 “Isola Rossa – Costa Paradiso” and ITB010006 “Monte Russu”.

In situ: Several conservation actions have been carried out between 1995 and 1997 in the framework of a LIFE Project entitled “Conservation des habitats naturels et des espèces végétales d’intérêt communautaire prioritaire de la Corse”, focused on the protection and restoration of some habitats and the assisted colonization of the sites of Fautea et Roccapina. Unfortunately, both of the small populations were unable to establish and disappeared just two years after the end of the project. Many populations of A. crispa fall within Natura 2000 sites FR9400594 (‘Sites à Anchusa crispa de l’embouchure du Rizzanese et d’Olmeto’) and FR9400604 (‘Station d’Anchusa crispa de Cannella’). A census of all populations has been carried out since 2000, first by G. Paradis (from 2000 to 2005), afterwards by the Conservatoire des Espaces Naturels Corses (CEN) from 2006 to 2015. The CEN also tried to protect some populations of the western (i.e. Cappicciolo and Portigliolo) and of the eastern coast (Cannella). Only the fencing of the beach of Portigliolo resulted to be very successful, allowing the numerical increase and the spreading of the local population. On the contrary, the fencing in the latter two sites was completely unsuccessful, so that in 2015 the population of Cappicciolo was already at the brink of extinction.

The French Ministry for Ecology, Sustainable Development and Energy published an ad hoc National Action Plan aiming at the protection of A. crispa. This plan provides an overview on the species’ ecology, distribution and status (last update: 2012), outlines some tools for its protection, summarizing the best practices and the most effective strategies for its long-term conservation. Among them: the nomination of the responsible authorities for the sites harbouring the populations, the writing down of official regulations for the protection of the species, the delimitation of public maritime domain, the acquisition of the sites where A. crispa lives, the implementation of a unique management plan for all the sites, the organisation and planning of ex situ conservation, the identification of suitable sites for assisted colonization, the reinforcement of the most threatened populations, the improvement of the monitoring protocols, the encouragement of further scientific investigation, the increase of public awareness and data sharing at the national, regional and municipality level. Up to now most of these goals have not yet been achieved. As concerns property, the Conservatoire du Littoral (Cdl) is owner of a small part of the site of Portigliolo, and has recently acquired the beach of Capu Laurosu (SE of Propriano). Between 2016 and 2017 the Cdl will fence the site with a stone wall in order to separate it from the adjacent road, will restore the bare areas due to past motorbike activities through bio-engineering techniques and by implanting native plants, will fence the nuclei with A. crispa and will eradicate the invasive alien plant Carpobrotus edulis. All these actions aim at stopping anthropogenic pressure on the site and should favour the survival - and even enhance the spread - of the local A. crispa population.

It is actually difficult to make previsions about the near future of the species on Corsica. As concerns the western populations, that of Cappicciolo is disappearing, while those of Cala Piscona and Portigliolo are stable at the moment. The small population of Capu Laurosu is expected to recover thanks to Cdl planned activities. Eastern Corsica populations are rapidly declining (Favone) and/or the space and habitat suitability is severely compromised (Cannella), so that assisted colonization is urgently needed.