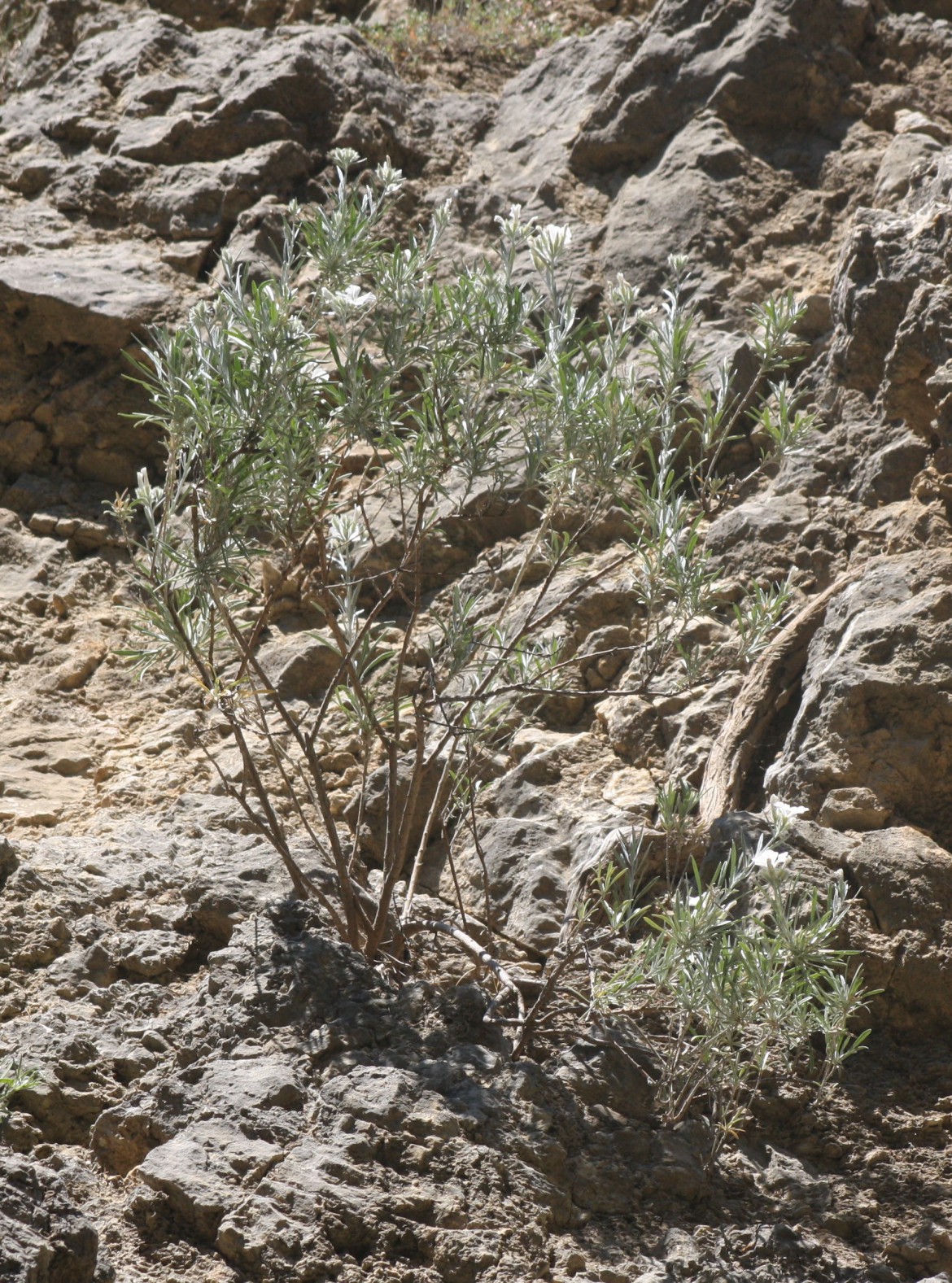 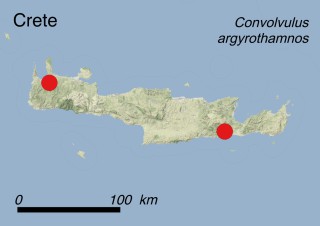 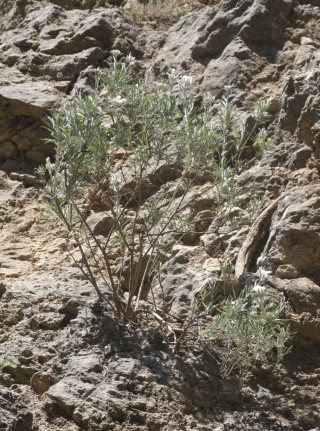 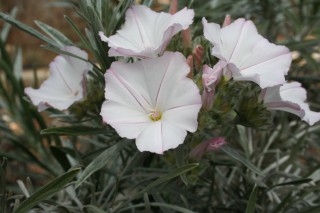 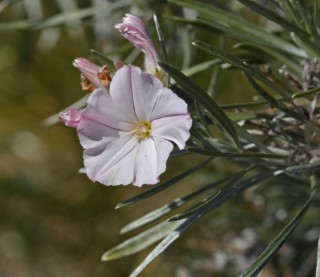 Convolvulus argyrothamnos is endemic to Crete and found on a single limestone cliff in the gorge of Psoriaris in the region of Ierápetra (Prefecture of Lassithi) at 450 m a.s.l. and in the gorge of Rokka in western Crete (Prefecture of Chania) at 150 m a.s.l. (habitat 6.2: Inland cliffs, rock pavements and outcrops). Plants with the appearance of C. argyrothamnos shrubs have been observed growing in inaccessible sites within the gorge of Samaria, nevertheless the occurrence of the species there has not been yet confirmed.

C. argyrothamnos is a shrubby plant reaching 80 cm in height, covered by silvery, silky hairs. The linear leaves are 1.5 to 8 cm long. Its white, bell-shaped flowers, 3.5 cm in diameter, resemble those of the common bindweed. They appear between June and August and are arranged in clusters of two to six at the tips of the branches. Fruits ripen from July to September.

C. argyrothamnos is one of the many Cretan endemic species that only grow on cliffs, the so-called chasmophytes. Most of them are evolutionarily ancient, and rocky habitats represent their last refuge. There they are protected not only from more widespread and competitive plants, but also from the voracious appetite of the omnipresent goats.

Using 2×2 km grids, the AOO is 8 km2, while the EOO is less than 100 km2. This species has been categorized as CR (Critically Endangered) according to IUCN Red List Criteria B1ab(v)+2ab(v), since its distribution range is extremely fragmented, with only two subpopulations occurring and located in two very distant areas of the island, while the very small size of the subpopulations (only 14 and 60 mature individuals at Psoriaris and Rokka respectively, in 2015) is expected to decline further unless concrete conservation actions are undertaken. The final blow could be wildfires (threat 7.1.1: Increased fire frequency/intensity), rare plant collectors (threat 5.2.1: Gathering terrestrial plants - Intentional use), or the great difficulty to perform sexual reproduction (threat 12.1: other threats), considering the very low number of mature individuals and the low probability of genetic exchange within the population, leading to a possible genetic depression. C. argyrothamnos is also threatened by overgrazing (threat 2.3.2: Small-holder grazing, ranching or farming).

Legally: on the international level, C. argyrothamnos is included in two legal documents: Appendix I of the Bern Convention and in Annexes II and IV of the 92/43 EC Directive as a priority species. The subpopulation of Lassithi prefecture enjoys indirect protection as it falls within the Natura 2000 site GR4320002 ‘Dikti: Oropedio Lasithiou, Katharo, Selena, Krasi, Selakano, Chalasmeni Koryfi’.

In situ: As C. argyrothamnos is listed as a priority species in Annexes II and IV of the 92/43 EC ‘Habitats’ Directive, it is included in a 6-year cycle national monitoring program (funded by the EU and national resources) for the assessment of its conservation status.

Ex situ: two plants, propagated by cuttings, are currently being cultivated at the Technological Education Institute of Heraklion in Crete. Although they flower, they do not produce fruit. Several adult plants are also cultivated at the Mediterranean Agronomic Institute of Chania (MAICh) in Crete, where a program of seed collection and storage has also been launched. The plants at the MAICh produce seeds (stored in the Seed Bank of MAICh) and seed germination of the species was studied in the framework of a PhD thesis.

The setup of microreserves would ensure long-term monitoring activities on the local plant population and the effective protection of its habitat. The plant Microreserve network has already been established in Western Crete for the protection of 7 threatened plants in the framework of the Cretaplant project (LIFE04NAT_GR_000104, 2004-2007). The expansion of the network to other areas of the island would be relatively easy as local authorities are aware of the project and would support this idea. Moreover, the project itself may improve the awareness of local people, land-owners and users on the importance of nature conservation. The survival of this species is unlikely unless it can be rapidly propagated ex situ by botanical gardens, followed by in situ reinforcement of the current sites and translocation actions in other suitable sites. It is equally important to protect the sites legally, and to undertake effective conservation and management measures.