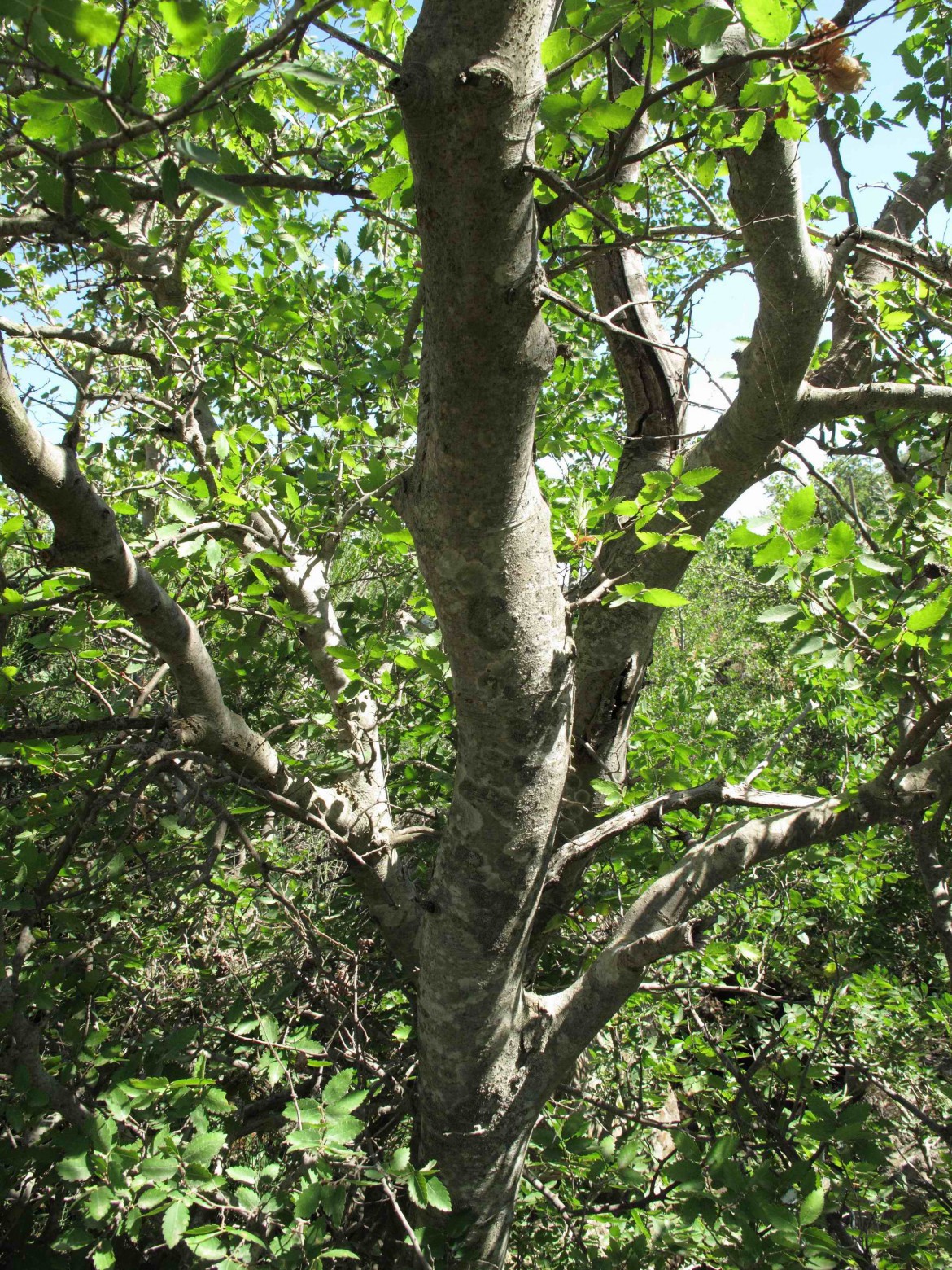 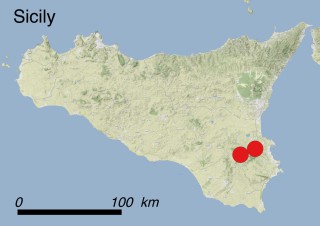 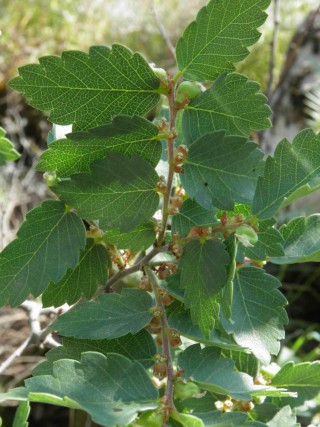 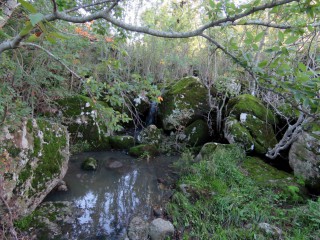 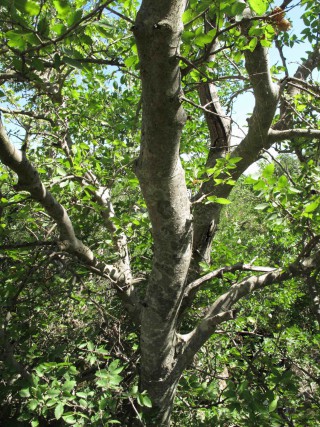 Garfì G., Buord S. 2012. Relict species and the challenges for conservation: the emblematic case of Zelkova sicula Di Pasquale, Garfì et Quézel and the efforts to save it from extinction. Biodiversity Journal, 3(4): 281-296.

Up to now only two small subpopulations are known: the first one, discovered in 1991 within the municipality of Buccheri, includes ca. 250 individuals thriving within a mosaic-like open landscape dominated by thorny shrubland (habitat 3.8.3: Spiny Mediterranean heaths - phrygana, hedgehog-heats and related coastal cliff vegetation) and open Quercus suber (cork oak) woodland (habitat 3.8.1: Maquis, arborescent matorral and thermo-Mediterranean brushes). The second is an almost pure population counting ca. 1600 plants and was discovered in 2009 ca. 17 km further east than the first population in the municipality of Melilli. Both stands are located on the northern slopes of the Iblei Mounts (south-eastern Sicily), between 320 and 520 m a.s.l., on bare soils with outcropping volcanic rocks. Both subpopulations are restricted to the bottom of gullies and along narrow streams (habitat 5.2: Seasonal-Intermittent-Irregular Rivers, Streams, Creeks), suggesting that these micro-habitats play a key role in helping the species withstand seasonal water stress.

The plants growing in the natural sites often show a shrub habit, growing up to 7 m tall only in the most suitable conditions. Interestingly, a root sucker of the first population planted twenty years ago in the town of Buccheri (820 m a.s.l.) turned into a small tree and presently is 8 m tall. Its bark is smooth and greyish, turning brownish-grey on the young twigs; it peels off in plates on the trunks of bigger trees. The leaves are ovate, dentate, densely covered by bristly hairs on both sides and are shed in autumn (October-November). The flowering period is April, when male, female and bisexual flowers can be found on the same individual. Flowering is irregularly observed every 2-3 years.

Z. sicula represents the westernmost species of the relict genus Zelkova, which includes five more species: three of them - Z. serrata, Z. schneideriana and Z. sinica - occur in Eastern Asia, Z. carpinifolia thrives in the Caucasian area, while Z. abelicea is endemic to the island of Crete (Greece). No successful pollination has so far been observed in the few flowering plants of Z. sicula, fluctuating from year to year from about 20 to 70 in total for the two subpopulations. All the examined seeds proved to be sterile, and the species is able to reproduce only through root suckers, whereas re-sprouting allows recovering promptly from damages caused by disturbance and drought stress. The total lack of sexual reproduction in Z. sicula results from triploidy. No genetic variability was recorded within each of the two subpopulations, so that each may derive from the spread of one single clone. If this hypothesis is confirmed, Z. sicula is without doubt the rarest woody plant of Europe and these last two clones probably are among the oldest living tree individuals on Earth.

Although a second population was recently found, Z. sicula should be considered as CR (Critically Endangered) according to IUCN Red List Criteria B1ab(iii)+2ab(iii). In fact, the current range is very small (0.18 and 0.50 hectares for the two subpopulations, respectively), with both EOO and AOO equal to 8 km2; moreover the population is severely fragmented and the habitat is concerned by severe decline since the last 10 years. Being unable to perform sexual reproduction and due to its extreme genetic impoverishment, the probability of extinction of this species is very high.

The plant communities hosting this species are still degraded due to past land uses (e.g. logging), and current cork harvesting (threat 5.3.3: Logging & wood harvesting - Unintentional effects: subsistence/small scale (species being assessed is not the target)), wildfires (threat 7.1.1: Fire and fire suppression - Increase in fire frequency/intensity) and grazing, mostly by cows (threat 2.3.2: Small-holder grazing, ranching or farming). Ongoing investigations on the water physiology of Z. sicula suggest that it requires moist conditions and point out the negative effects of severe heat episodes (threat 11.3: Extreme temperatures) and droughts (threat 11.2: Droughts), which periodically cause severe injuries to the plants. These factors may increase the frequency of wildfires and the impact of pests and diseases such as the aphid Zelkovaphis trinacriae and several endophyte mushrooms and molds (threats 8.2.1 Problematic native species/diseases – Named species and 8.2.2: Problematic native species/diseases – Unspecified species).

Legally: since 2013 Z. sicula is officially protected by the Presidential Decree of the Sicilian Region 27/05/2013.

In situ: both subpopulations are fenced to prevent grazing and fall within two sites of the European Natura 2000 Network. Several actions of the ongoing EU LIFE Project (http://zelkovazione.eu/), such as the grazing management plan and the afforestation activities aimed at restoring local habitats and speeding up vegetation dynamics, are improving the conservation status of the species.

Ex situ: in the framework of the above-mentioned project, new plants have been obtained through root cuttings (by the Conservatoire National Botanique of Brest) and in vitro techniques (by the Institute of Biosciences and BioResources of Palermo with the support of the University of Fribourg). Part of this material is being used to re-inforce the Buccheri population and to create new subpopulations in other Sicilian sites selected outside its current range but assumed more suitable for its survival in case of global warming.

Future field exploration throughout the Iblei Mts and the Sicilian territory, supported by modern GIS and remote sensing tools, have been planned in order to find new subpopulations which may contain precious genetic heritage to be conserved. Better information on the reproduction biology, ecological requirements (soil and water) and on ecosystem-level relationships (competition, facilitation, parasites and predators) should improve conservation measures, too.

Garfì G., Buord S. 2012. Relict species and the challenges for conservation: the emblematic case of Zelkova sicula Di Pasquale, Garfì et Quézel and the efforts to save it from extinction. Biodiversity Journal, 3(4): 281-296.