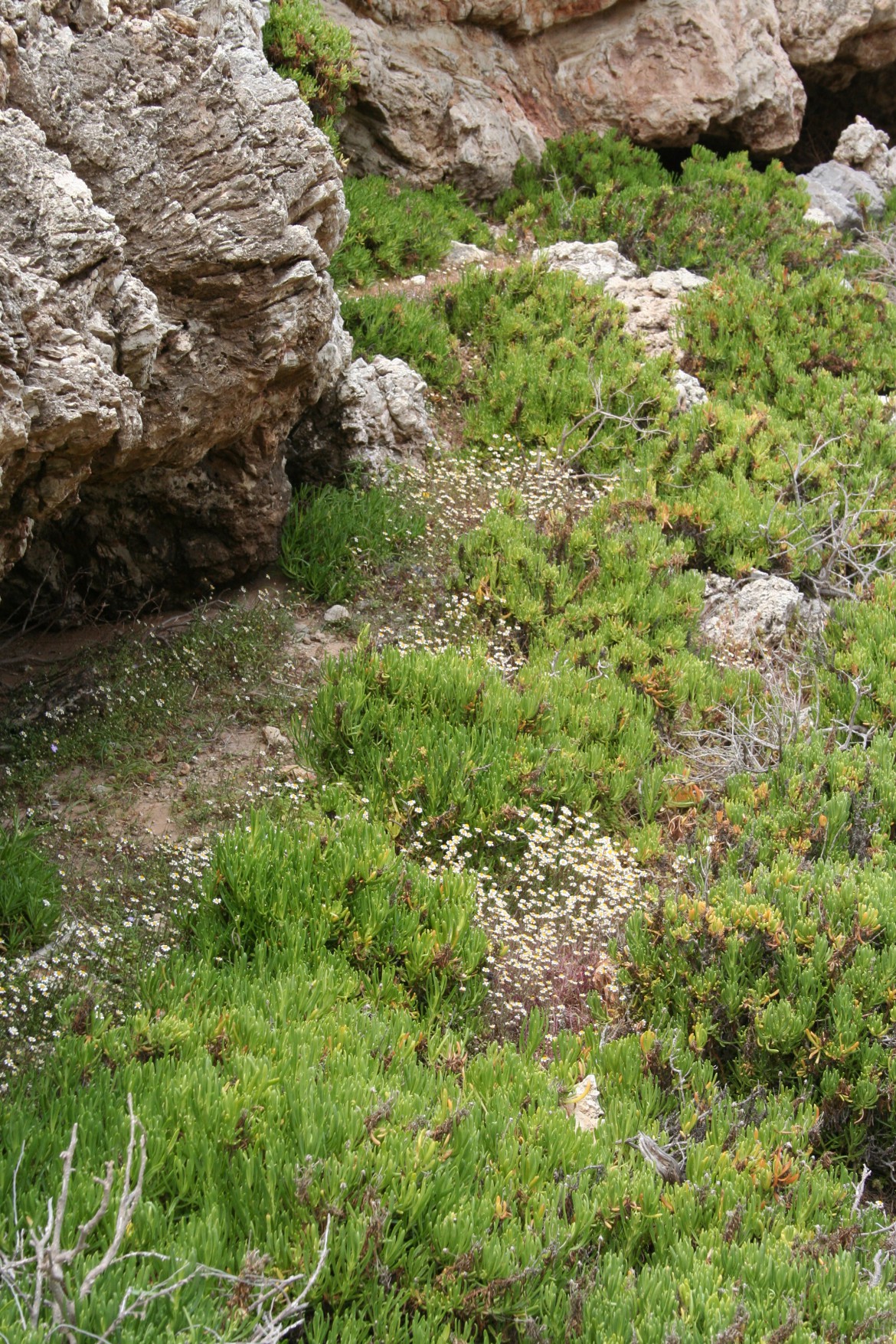 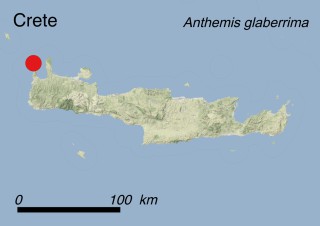 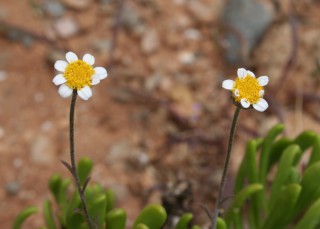 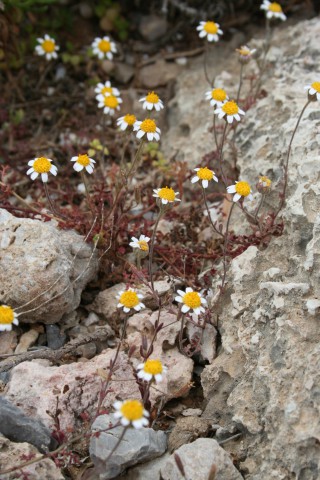 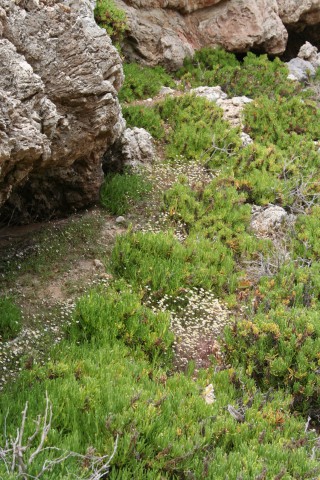 MAICh, 2005. Action A.1: Inventorying of the localities of the target species/habitats (CRETAPLANT: A Pilot Network of Plant Micro-Reserves in Western Crete- LIFE 04 NAT-GR-000104).

Anthemis glaberrima is endemic to the islets of Agria Gramvousa and Imeri Gramvousa, which are located at the north-western tip of the island of Crete, where it grows on littoral rocks (habitat code 13.1: Sea cliffs and Rocky Offshore Islands). The species was previously reported to occur also in a single locality of the prefecture of Chania in the western part of the main island. Recent accurate field surveys pointed out that this record probably issued from a misidentification with Anthemis rigida. The total AOO is ca. 0.035 km2, with 60'000 to 100'000 individuals. The subpopulation of Imeri Gramvousa covers an area of ca. 0.0015 km2 and consists of about 10'000 to 20'000 individuals.

This completely glabrous species is an annual herb: the seeds are dispersed (mainly by wind) at the end of the spring and stored throughout the summer in the soil before germinating and giving rise to a new plant after the first autumn or winter rain. Stem height varies from 2 to 30 cm. The leaves may be entire or deeply incised. The small, daisy-like flower heads are 1 cm in diameter and consist of small tubular yellow flowers in the centre surrounded by white ray flowers (pink underneath). The species flowers from April until May and its dry ribbed fruits (achenes) are mature at the end of May.

Agria Gramvousa hosts nine Greek endemic plants; hence, the botanic value of this islet is remarkable with respect to its tiny size. A. glaberrima is an islet specialist and belongs to the subgenus Ammanthus, which includes several species (such as Anthemis ammanthus, A. filicaulis and A. tomentella) endemic to the southern islands of the Aegean Sea.

This species has been categorized CR (Critically Endangered) according to IUCN Red List Criteria B1ac(iv)+2ac(iv), as is mentioned in the European Red List of Vascular Plants. This means that the area where it is found is very limited, and the number of mature individuals is prone to great yearly fluctuations. The main threats to this species include accidental or deliberate introduction of goats or invasive plant species to the islets as well as garbage and solid waste (threats 2.3.2: Small-holder grazing, ranching or farming, 8.1.1: Invasive non-native/alien species - Unspecified species and 9.4: Garbage & solid waste).

Legally : Internationally, this species is included in three legal documents: Appendix I of the Bern Convention, Annexes II and IV of the 92/43 EC Directive, where it is listed as a priority species and the Greek Presidential Decree 67/1981 “about the protection of the native flora and fauna…” (Greek Off.J. F.E.K.A’ 23/30.1.1981, corrected by F.E.K.A’ 43/18.2.1981). The islet populations enjoy indirect protection as they fall within the Natura 2000 site GR4340001 ‘Imeri kai Agria Gramvousa - Tigani kai Falasarna - Pontikonisi, Ormos Livadi - Viglia’.

In situ : A plant microreserve of 4.4 ha for a large part of one of the two subpopulations of the species (in the northern part of the islet of Agria Gramvousa) has already been established in the framework of the Cretaplant project (LIFE04NAT_GR_000104, 2004-2007). The area of the Microreserve is designated as a Wildlife Refuge and is protected by Greek Law. Moreover, the setting up of microreserves ensures long-term monitoring activities on the local plant population and the effective protection of its habitat. Furthermore, the project itself improves the awareness of local people, land-owners and users on the importance of nature conservation.

Ex situ: Seeds are stored in the seed bank of the Mediterranean Agronomic Institute of Chania in Crete and in the Seed Bank of the Faculty of Biology at the National and Kapodistrian University of Athens. Few individuals are also cultivated in the botanical garden of the Institute of Chania.

Given the high number of endemic plants which occur on Agria Gramvousa, a management plan should be put in place to prevent the introduction of alien invasive plants. In fact, special attention should be given to the demographic trend of the local goat population, which might threaten the precious botanic heritage of the islet by disrupting the natural balance of local vegetation. Seeds of A. glaberrima should also be stored in other seed banks and plant cultivation should be carried out in several botanical gardens.

MAICh, 2005. Action A.1: Inventorying of the localities of the target species/habitats (CRETAPLANT: A Pilot Network of Plant Micro-Reserves in Western Crete- LIFE 04 NAT-GR-000104).