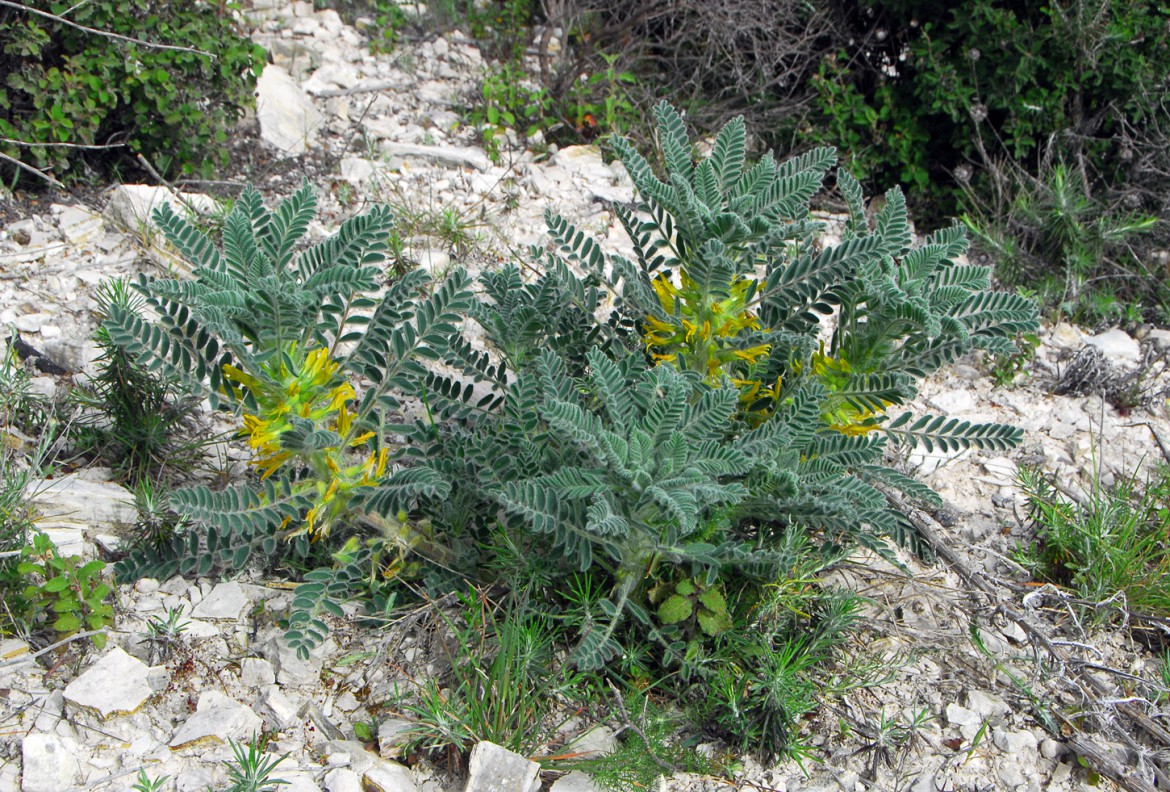 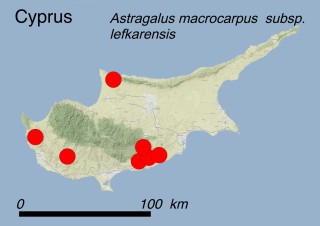 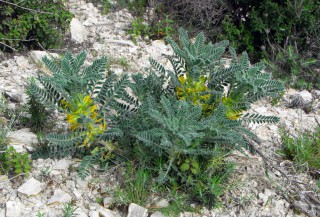 This subspecies is endemic to Cyprus and occurs in seven locations. It is found near the villages of Lefkara (after which the subspecies has been named), Asgata, Tochni, Alaminos, Kormakitis, Kelokedara and Ineia between 75 and 700 m a.s.l. Astragalus macrocarpus subsp. lefkarensis grows on mountain slopes within secondary plant communities derived from the degradation of evergreen mixed forest, i.e. open maquis (habitat 3.8.1.: Maquis, arborescent matorral and thermo-Mediterranean brushes) and phrygana (habitat 3.8.2: Garrigue).

A. macrocarpus subsp. lefkarensis is an erect, hairy perennial shrub with a robust stem 30-60 cm high. The leaves are compound with 15-30 leaflets which are longer than wide, and can be opposite or alternate. The flowers are bright yellow, arranged in axillary clusters of three to nine. The flowering period is between March and April. The fruits are egg-shaped and relatively large (2.5-5 cm) pods, containing up to five large seeds.

The plant is drought-resistant due to its thick grey-white hairs. The seeds are dispersed when the ripe beans fall off the plant and then roll due to their heavy weight and elliptical shape. No mechanisms for uphill seeds dispersal are known, but propagation from rhizomes probably prevents the population from gradually being shifted downwards.

After recent field surveys, A. macrocarpus subsp. lefkarensis is no longer listed as CR (Critically Endangered). It has been included in the Red Data Book of the Flora of Cyprus as VU (Vulnerable) according to IUCN Red List Criterion D2, due to the restricted distribution range. When using a 1×1 km grid, the AOO is 17 km2 and the EOO is 134 km2. The total population size amounts to ca. 3000 individuals (2007 census).

The lack of pollinators seems to be the cause of the low sexual reproduction of A. macrocarpus subsp. lefkarensis. Since this subspecies produces a very small quantity of seeds, reproduction is mostly vegetative resulting in very low genetic variability in the four small remaining subpopulations. This may limit its capacity to adapt to environmental changes.

During spring a Bruchidae beetle (Βruchidius plagiatus) lays its eggs on the flowers. The larvae hatch in the seeds and feed on their nutritive reserves, consuming 50-75% of the seeds (threat 8.2.2: Problematic native species/diseases - Named species). Seed consumption along with fruit and seed abortion are the main reasons for the low reproductive success of this species.

The expansion of both urban areas (threat 1.1: Housing and Urban areas) and tourism (threats 1.3: Tourism & recreation areas, and 6.1: Recreational activities) threaten the populations of Lefkara and Alaminos.

Legally: This subspecies is protected by the Bern Convention, where it is listed in Appendix I, and by the 92/43 EC ‘Habitats’ Directive where it is included as a priority species in Annexes II and IV. It is included in the Red Data Book of the Flora of Cyprus as Vulnerable. In 2013 the subpopulation located in Asgata (the largest subpopulation) was designated as a Plant Micro-Reserve (http://www.plantnet.org.cy/update_on_the_progress.html).

In situ: Only part of the population is included in the Natura 2000 network; the subpopulation at Lefkara (CY6000005 – Periochi Lefkaron) and the subpopulation at Asgata (CY5000007 – Periochi Asgatas). Monitoring activities took place from 2010 to 2013 within the framework of a LIFE+ project entitled 'Establishment of a Plant Micro-Reserve Network in Cyprus for the Conservation of Priority Species and Habitats' (LIFE08 NAT/CY/000453).

Ex situ: A small number of seeds collected from the Lefkara and Kelokedara subpopulations are stored in the seedbank of two institutions located at Nicosia: the Nature Conservation Unit of Frederick University of Nicosia and the National Seed Bank of the Agricultural Research Institute of Cyprus. The subspecies has been successfully cultivated by the Department of Forests and planted in the Athalassa Botanic Garden in Nicosia.

In situ: The identity of potential pollinators should be investigated in order to enhance the chances of offspring.The insect Βruchidius plagiatus, which predates on the seeds of A. macrocarpus subsp. lefkarensisis is a rare Cyprian endemic as well; therefore, any interventions have to be designed very carefully. Moreover, the competent authorities need to inform landholders about the presence of this rare plant in their property and to encourage its protection.

Ex situ: Since the plants have a very low reproductive capacity, collecting large numbers of seeds from the wild and storing them in a seed bank could affect the recruitment of natural subpopulations. Therefore, any collection for ex situ conservation needs to be carried out carefully and documented in order to conserve the maximum genetic diversity in the collections and create the minimum damage to the wild populations.