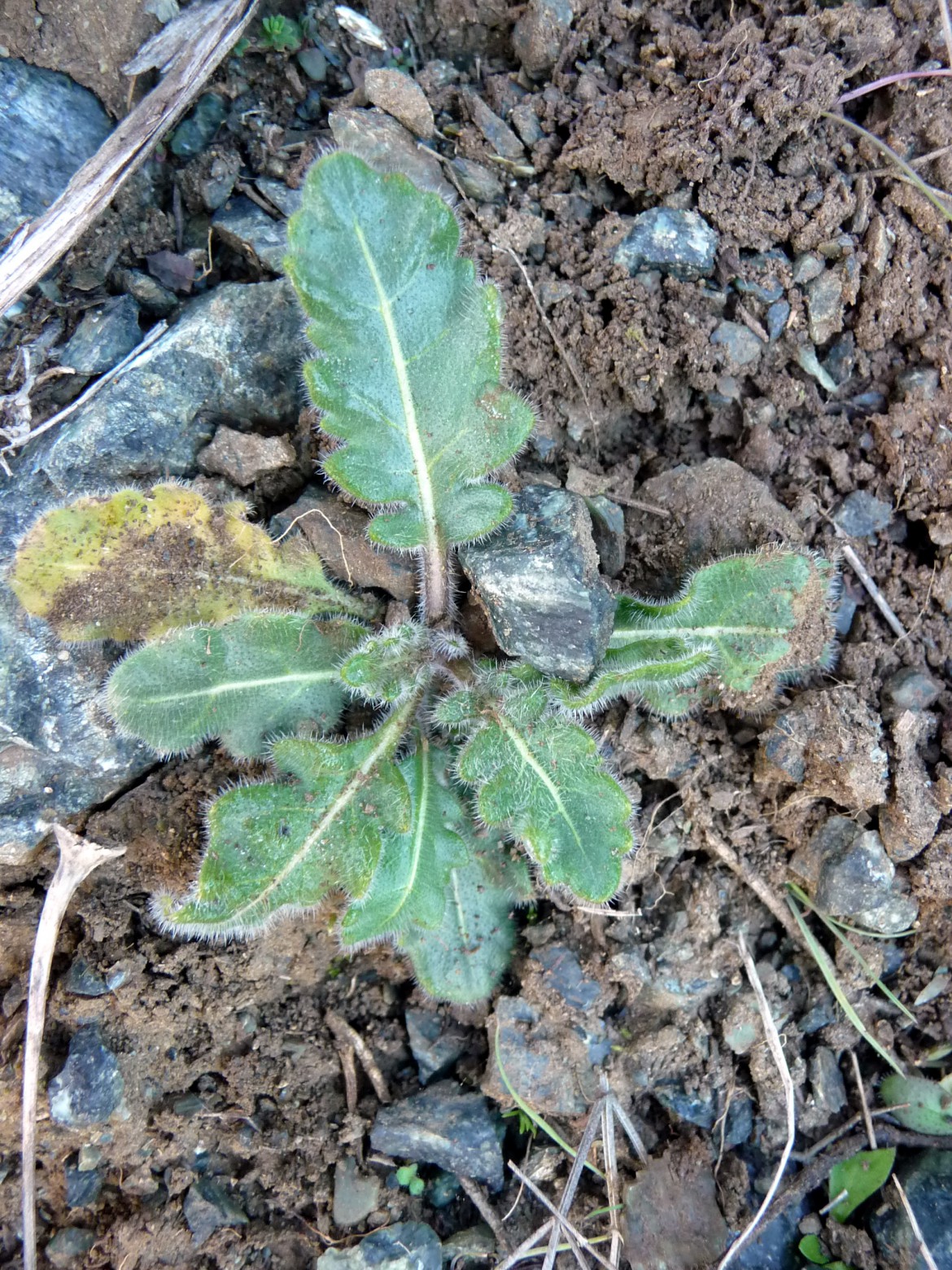 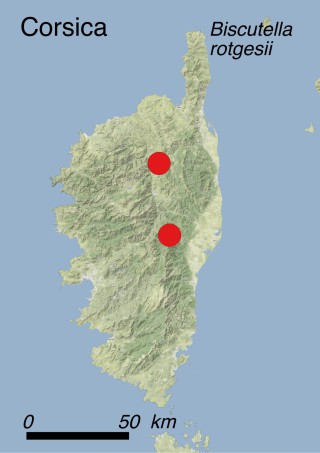 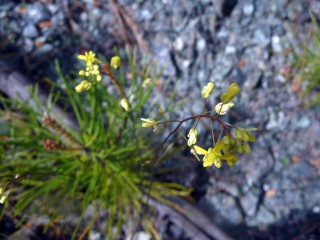 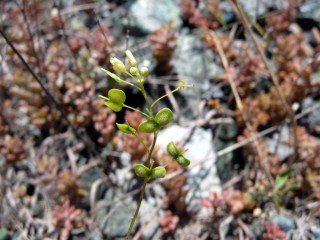 Where is it found?

Endemic to Corsica, this species colonizes rockeries and screes on serpentines, under a meso-mediterranean-type climate, between 150 and 320 m a.s.l. Up to now three populations have been detected; the first occurs north of Ponte Leccia (Morosaglia municipality, 5 ha), the second along the slopes of the quarry of Salastraco (Pietroso municipality, ca. 3 ha), and the last at the canyon of Trévadine (Ghisoni and Ghisonaccia municipalities, ca. 25 ha), located just below the famous canyon of the Inzecca. The species shows a wide ecological amplitude, colonizing both steady and incoherent substrates on slopes ranging from 5° to 70°, within open plant communities such as grasslands (habitat 4.4.1: Dry grasslands), garrigue (habitat 3.8.2: Garrigue) and low maquis (habitat 3.8.1: Maquis, arborescent matorral and thermo-Mediterranean brushes) or in shaded conditions under the tree canopy of maquis (3.8.1) or woodland communities dominated by maritime pine (habitat 1.4.3: Coniferous woodlands), holm oak (habitat 1.4.2: Broadleaved evergreen woodland) or cade juniper (3.8.1).

How to recognise it?

It is a little perennial plant 10 to 35 cm tall, with a green-ash colored stem that is ramified from the base. The leaves are rough and hairy, with a crenulated margin and form a basal rosette. The small (<1 cm) pale yellow flowers are grouped into loose racemes. The fruits (silicles) are typically lens-shaped; once ripe and dry, they open and release the seeds. Flowering occurs between March and October but mostly between April and May.

As most of the plants colonizing serpentines, this species is able to tolerate high amounts of heavy metals as well as low water availability, thus avoiding the concurrence of most of the other plants, less adapted to thrive in such hostile soil conditions.

Why is it threatened?

The risk level of Biscutella rotgesii has been downscaled with respect to the first edition of the Top50: it has now been categorized as VU (Vulnerable) according to the IUCN Red List Criteria D2. In fact, although field investigations carried out in 2005 by the Conservatoire Botanique National de Corse (CBNC) allowed to discover three populations covering rather wide areas and counting a high number of individuals, using a 2×2 km grid the AOO is 16 km2, the EOO 45 km2, and the number of populations <5 and the species is prone to several potential threats, such as wildfires (threat 7.1.3: fire & fire suppression: trend unknown/unrecorded) like the one that occurred in 1993 which destroyed most of the population of Ponte Leccia; road construction and maintenance (threat 4.1: Roads and railroads), very risky for the population of the canyon of Trevadine; the alteration of local plant assemblages due to the overwhelming competition and the fast spread of the alien invasive Ailanthus altissima (threats 8.1.2: Invasive non-native/alien species - Named species, and 11.1: Habitat shifting & alteration), and extensive cattle grazing (threat 2.3.2: Small-holder grazing, ranching or farming). Only the population of Salastraco appears to be safe from threats.

What has been done to protect it?

Legally: the species is listed among the protected plants of Corsica, which is complementary to the national list (governmental decree of June 24, 1986 published in the Official Journal of the French Republic on August 15, 1986). B. rotgesii also figures within the Red Book of the Threatened Flora of France (1995). No protection measure is effective at an international level.

An ad hoc National Action Plan has been written down. This document provides an overview on the species’ ecology, distribution and status (last update: 2012), outlines some tools for its protection, summarizing the best practices and the most effective strategies for its long-term conservation. Unfortunately, it has not yet been published by the French Ministry of Environment.

In situ: only a small part of the population of the canyon of Trévadine grows within the Natura 2000 site R9400597 ‘Défilé de l’Inzecca’. Two prefectoral decrees for biotope protection (arrêté préfectoral de protection de biotope) were created for the Ponte Leccia and Inzecca subpopulations. After being informed about the presence of the species, the regional road service carries out any cleaning/maintenance interventions of the roadsides with a great caution, so that their impact on local subpopulations is negligible.

Ex situ: The Conservatoire Botanique National de Corse (CBNC) has collected and stored seeds from the 3 locations. B. rotgesii is also cultivated at the Botanical Garden of Porquerolles (France), where a seed collection is stored as well.

What conservation actions are needed?

Conservation is an important issue for this strictly Corsican endemic, with only 3 stations. Nevertheless, B. rotgesii does not seem to be a particularly endangered species. The study carried out by the CBNC (2012) shows that it is able to colonize many habitats on serpentine and seems to tolerate quite well several disturbance factors, being able to grow on shallow and poor soils and sheltered by cushion-like chamaephytes which are not consumed by livestock (Anthyllis hermanniae, Euphorbia spinosa, Genista corsica, etc.).

Further field investigations on the ecology and biology of the species should be encouraged to improve the current knowledge on real threats. In particular, it is important to clarify the impact of grazing and wildfire occurrence on the populations, as well as the effect of encroachment by Pinus pinaster and spreading of Ailanthus altissima. Public awareness on this little plant should also be promoted. In this direction, an information panel has already been prepared by the CBNC.