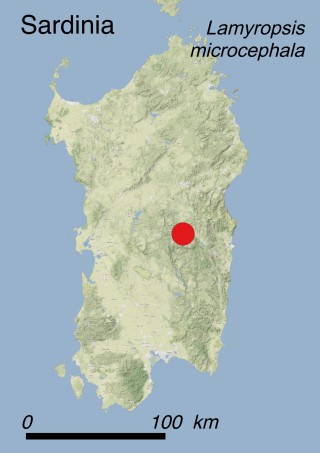 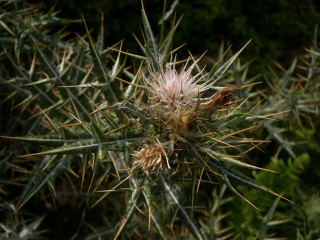 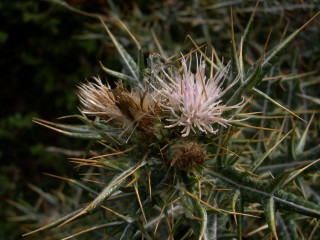 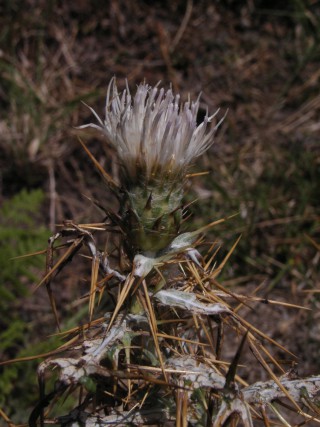 Lamyropsis microcephala is endemic to Sardinia, and is found only in the Gennargentu Massif. Recent field studies on the distribution of this plant allowed to ascertain that its population range is larger than previously known: in addition to the historical site, three new nuclei were discovered on the slopes of Bruncu Spina and Punta Paolinu mountains (Fonni and Desulo municipalities). The surface of these four subpopulations varied from 200 m2 to 240’000 m2, at altitudes of 1450-1820 m a.s.l., on N- and W-facing slopes of 15-45°. The plants of these nuclei grow on metamorphic gravels, are adapted to intense soil erosion and appear to prefer the humid microclimatic conditions of catchment areas and small valleys subjected to long-lasting snow persistence.

L. microcephala is a 70-80 cm tall perennial rhizomatous herb that is heliophilous and mesophilous. The plant regenerates every year from buds through a broad rhizome just below the soil surface. The plant has tufts of very spiny whitish stems covered with woolly hairs. The leaves are always longer than wide, sometimes lanceolate in shape, with narrow and deep incised lobed segments that point in all directions and are covered with stout yellow thorns.

The flower heads are usually solitary and located at the top of the stems. Bracts are spiny and woolly at the tip. The flower head is composed of dozens of tiny tubular white or pinkish flowers. The fruits are 5 mm long, smooth, with a feathery 10-15 mm long parachute specially adapted for wind dispersal. The flowering season starts at the end of June and finishes in August, while the fruiting season begins at the end of July and lasts until September.

L. microcephala has been reported to have low seed set and low seed germination and to mainly propagate vegetatively. Based on seed germination requirements (i.e. pre-chilling and high germination temperatures) it was suggested that L. microcephala is adapted to a temperate climate and that its distribution is threatened with continuous contraction under present Mediterranean climatic conditions.

L. microcephala shares the same evolutionary history with the other three congener species (L. sinuata, L. carpini, and L. cynaroides), a history which might have involved an early range expansion of a common ancestor, followed by successive fragmentation episodes, probably associated with progressive climatic modifications related to the onset of the Mediterranean climatic regime during the Pliocene. The current distribution range of L. microcephala, restricted to mountain habitats is likely to represent relict populations of the once more widespread mesophytic ancestors.

The genetic analyses show that L. microcephala conserves a moderate level of genetic diversity at the population level and suggest that a recent genetic drift phenomena affected the biggest nucleus. Some nuclei likely have a common origin or history, probably due to extinction and colonization events and they may have been a unique population until the last century, when they were subsequently fragmented by human activities such as building of a ski resort and overgrazing.

L. microcephala is threatened with tourism and other outdoor activities (Threat 6.1: Recreational activities) followed by the expansion of pastoral activities and nomadic grazing of sheep, cattle, horses and pigs (Threat 2.3.2 Small-holder grazing, ranching or farming).The construction of a ski resort in the Bruncu Spina mountain has greatly fragmented the population area and the continuous maintenance activities of these facilities represent a threat factor for the remnant nuclei of this population (Threat 1.3: Tourism & recreation areas).

Based on the Extent Of Occurrence (EOO = 1.62 km2), Area of Occupancy (AOO = 4 km2), number of locations (one) and an inferred decline due to habitat loss and fragmentation of the original population, this plant must be categorized as Critically Endangered (CR) according to the IUCN Criterion B1ab(i,ii,iii,iv,v) + 2ab(i,ii,iii,iv,v).

L. microcephala is listed in Appendix I of the Bern Convention and, as a priority species, in Annexes II and IV of the EEC Habitats Directive. As the law on species protection of the island proposed in 2005 by the Regional Council of Sardinia has not yet been approved, currently there is no legal protection for this species at a regional level.

The Autonomous Region of Sardinia funded in 2008 a conservation project aimed at the safeguard of the ten most threatened endemic plants species of the island comprising in situ and ex situ studies. As part of this project, the Biodiversity Conservation Center (CCB) of the Cagliari University started the periodic in situ monitoring of all know populations of this species and all mature plants are monitored every year (in 2011 the population consisted of ca. 1’150’000 reproductive ramets). At the same time, a long-term ex situ conservation program was set up at the Sardinian Germplasm Bank where seeds coming from the different nuclei were stored, and some duplicata were also sent to the Millennium Seed Bank (Royal Botanic Gardens of Kew).

An up-to-date conservation status assessment, as well as studies on in situ germination and seedling recruitment, on the genetic structure of the populations and on its phylogenetic relationships with its Mediterranean relatives were carried out in the scope of the above mentioned projects.

The last remnant populations of L. microcephala need an integrated conservation program in order to provide an adequate level of protection. In particular, management plans should be developed to protect the wild populations from any human disturbance and overgrazing. In addition, any maintenance intervention concerning the ski slopes should be carefully evaluated in order to minimize impacts on this species.

The monitoring activities of the population must be continued and the long-term ex situ seed conservation, as already started at the Sardinian Germplasm Bank, should be continued in order to conserve the highest genetic variability possible and obtain plant material for future reinforcement activities.

In depth biological and ecological analysis should be carried out to shed light on the population demography of this endemic plant.